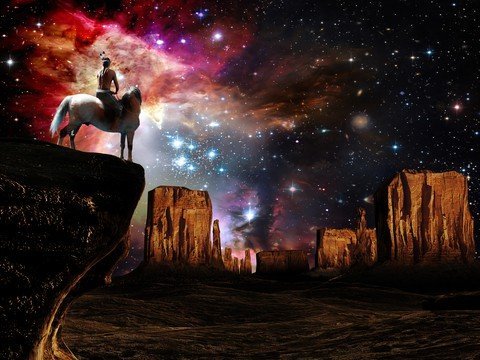 Some years ago, during my late husband’s illness I had an overwhelmingly euphoric and blinding epiphany.  I was in the middle of a visualization for his wholeness and return to perfect health when I was filled with a brilliant shining river of love and light.

An indescribable feeling of oneness filled my heart.

There was no separation between he and me and this perfect love that surrounded and included everything.  Here I was sitting in a hospital room with my seriously ill husband, filled with an abundance of joy and love and peace, unlike anything I’d ever experienced.

It was the beginning of my awakening.

In one tiny moment I was aware of a different world.  My life had changed at a deep and fundamental level. This experience redefined reality for me and my world would never be the same.

Not that the world had changed at all, it was my perception of it that had altered.

Since then, I’ve learned so many tips and techniques that make my life easier, happier and more fulfilling and expansive, but there have been a few revelations that have rocked my world and I thought I’d share five of them, in no particular order.

1. Beliefs are only beliefs

Ideas I’d consented to or accepted, oftentimes totally unconsciously and yet they were what I used to view the world around me, to make sense of the experiences I had, and like most of us I was perfectly happy to have all my beliefs validated.

So when I used to believe that my brother was an argumentative little brat and we then had countless arguments, I could say, see, I told you so.  Belief validated.

I learned it was necessary to first to examine my beliefs and then to let go of ones that no longer served me and the most amazing thing of all, that this was possible.

When I woke up to the fact that imagination made my reality, I suddenly got that I was making my life up as I went along  through the use of my imagination, which created a vibration within me and drew towards me everything that matched that vibration of energy.

All the worries and anxieties I’d ever experienced were totally misusing my imagination to experience stuff I didn’t blooming want.  I needed to make up something better…much better.

3. You are not your body

It was a year after my husband had passed away and I had to stop reading and think about this.  I thought about it for the rest of the night, I couldn’t sleep…it had a huge impact on how I lived my life.

I began to look at events and experiences as pathways to higher and higher levels of conscious living.  As opportunities for my personal growth and development instead of things that happened…well just because.

I became aware that there was so much more to life than I had ever known and it answered the question that I’d had since I was fifteen…is this all there is?  A whole new dimension of living had been given to me.

4. With God all things are possible

I know there are those for whom just the very word God troubles them.  That’s fine…substitute a word that resonates with you…the Universe, Creative Power, the Infinite One…you know what they say about a rose by any other name.

Studying life laws and how they operated, just as consistently and effectively as physical laws made sense.  The law of attraction made sense.  As did all the other laws.

But there was something missing for me.  I couldn’t persuade myself that little old me was capable of creating much of anything, never mind a whole new life.

And then I began to study Neville.  His interpretation of these laws and how they operated didn’t just make intellectual sense, they resonated with me at a deep spiritual level.

He wasn’t one for saying ‘believe me because I say it’s so’, he always wanted everyone to test his philosophies because he absolutely ‘knew’ that they would always work.

Through him I began to see that it wasn’t little old me that was doing it at all, it was the divine spark within me, that contained all the power.

Now this might seem a matter of semantics to many, but it mattered to me.  I could totally accept that it wasn’t me Elle who was the maker and builder of my life, it was me Elle connected to, one with, and operating that higher power within me that was creating my life experiences. The spiritual element was the liberating factor for me.

Using the power of imagination couldn’t be a five, ten or fifteen minute experience once a day.  That’s great and it absolutely means that for some time every day I was dwelling in the place of being who I wanted to be, or having what I wanted to have.

But then, for the rest of the day I’d be back to looking at life through the eyes of she who didn’t have, or wasn’t being what she wanted.  A little counter productive don’t you think?

So I trained myself, step by slow step, to think from the end.  So that if I had the desire for say experiencing the best and last romance, I would not only invest my ten to fifteen minutes daily imagining, or visualizing it, throughout my day, but I would think about it as though it were true, right here and now.

I’d imagine what we’d be doing later in the day, or where we were going for the coming weekend…you get the picture.  And this works with everything, success, finances, growth…anything.

Your turn.  What has turned your world upside down?

I Feel Guilty: What Can I Do About It?