If you’ve read my bio you’ll know that we travelled a lot.  As a kid, we moved every two years…home, school, towns, even countries.  It was exhilarating and sometimes hard.  Having to make new friends every couple of years became a really big challenge. 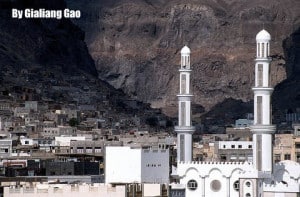 This place was built in the middle of an extinct volcano.  A crater.  Rock, rock and more rock.  Nothing green growing anywhere.   And hot.  There were days when it was 110 degrees and that was in the shade.  Most folks wandered around with a small towel around their neck to stop the perspiration running down their backs.  Not me though, that wouldn’t have been cool.  Although, maybe it would.

There was sand, and sand, and more sand, not the beachy kind of sand, it was course, dirty sand that blew in your eyes and in your hair and up your nose and that didn’t include sandstorms, when it was a hundred times worse.  We had arrived from the cool, green, grassy Island known as the United Kingdom.  Here was I, a lover of greenery, of trees and meandering streams running across meadows, of lying on the grass listening to skylarks and the gentle sound of the breeze brushing across the leaves creating a symphony all its own.  Yes, I was a lyrical twelve year old.  Here I was, surrounded by giant peaks of an old, long dead volcano.  I didn’t care that some said Cain and Abel were buried here, or about the legend that said Aden was one of the oldest places on the earth.  I didn’t want to be here.  I think I must have lost my happy gene.

I wandered around like a little lost soul, climbing up craters that hadn’t seen any activity in a long time – even the goats didn’t venture here – I’d get to the top of crumbling rock only to see another dead peak to climb.  And more dead peaks as far as my eyes could see.  No signs of life, it was all dead.

I visited the baths where it was rumoured Cleopatra bathed…but I didn’t think so, they were just ancient water tanks as far as I could tell.  I was an intinerant wanderer of sorts,  looking for something, anything to be happy about, and had my Mum been aware of all that I was up to she would have had a fainting fit.

I roamed the souks and the bazaars and back alleys, a small, skinny twelve year old girl who everybody ignored.  I was no threat.  I was insignificant and it kept me safe and almost invisible, leaving me free to wander where I chose.